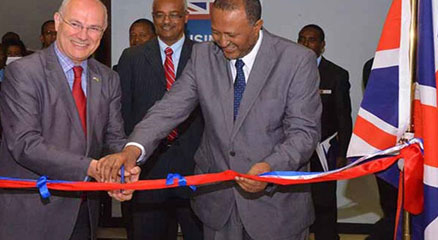 The factory, a joint investment between Ahadu PLC and UK-based Vasari Investments Group, has the capacity to produce 500 quintals of biscuit per day.

Each of the four corridors, being built to produce pasta will have a capacity of producing 900 quintals per day.

The factory has set plan to make expansions in the coming three years with 3 billion Birr which will enable it produce 6,500 quintals of flour per day.

Speaking at the inauguration, President Mulatu Teshome said the government has given due attention to industrial development, specially manufacturing, food and beverage areas.

The government is committed to provide production areas and other assistance for both local and foreign investors at the industrial parks being built around the country, the president said.

Noting UK investment was very low a few years ago, UK Ambassador to Ethiopia, Greg Dorey said he is pleased at the way “our investment has taken off dramatically from this low case in recent years.”

Though UK investment is increasing in a variety of sectors, “food and beverages continues to be one area in which we think the UK has a great deal more to offer to the Ethiopian market” he said.

“Ethiopia is now seen as a core market for Vasari and its commitment to the market is highlighted by the existence of two permanent in-country representatives who have a wealth of experience across numerous spheres of the Ethiopian economy.”

Vasari’s first local investment was in the Dashen Brewery, one of the largest brewers in the country in partnership with their local partner TIRET.

“The Ahadukes project goes very much with the grain of the Government of Ethiopia’s desire to add value to agricultural production through the establishment of new processing methods and establishments. It will contribute to import substitution and meeting export targets as well as creating large numbers of jobs and transferring technology.”